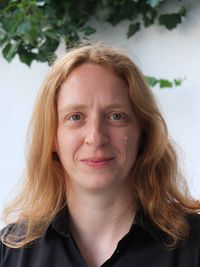 We study the spectral properties of the Laplace operator associated to a hyperbolic surface in the presence of a unitary representation of the fundamental group. Following the approach by Guillopé and Zworski, we establish a factorization formula for the twisted scattering determinant and describe the behavior of the scattering matrix in a neighborhood of \(1/2\).

We provide Fourier expansions of vector-valued eigenfunctions of the hyperbolic Laplacian that are twist-periodic in a horocycle direction. The twist may be given by any endomorphism of a finite-dimensional vector space; no assumptions on invertibility or unitarity are made. Examples of such eigenfunctions include vector-valued twisted automorphic forms of Fuchsian groups. We further provide a detailed description of the Fourier coefficients and explicitly identify each of their constituents, which intimately depend on the eigenvalues of the twisting endomorphism and the size of its Jordan blocks. In addition, we determine the growth properties of the Fourier coefficients.

We present the Laplace operator associated to a hyperbolic surface \(\Gamma\backslash\mathbb{H}\) and a unitary representation of the fundamental group \(\Gamma\), extending the previous definition for hyperbolic surfaces of finite area to those of infinite area. We show that the resolvent of this operator admits a meromorphic continuation to all of \(\mathbb{C}\) by constructing a parametrix for the Laplacian, following the approach by Guillopé and Zworski. We use the construction to provide an optimal upper bound for the counting function of the poles of the continued resolvent.