The main object of this project are  manifolds equipped with a certain class of complete Riemannian metrics, which are called fibred cusp metrics, and generalizations and variants of them.

A fibred cusp metric on a compact manifold with boundary, $M$, and associated to a fibration $\phi:\partial M\to B$ is a Riemannian metric on the interior of $M$ which near $\partial M$ takes the form

Generalizations involve a tower of fibrations $\partial M\to B_{m-1}\to\dots\to B_0$ with different orders of degeneration for each level of fibre, or a manifold with corners $M$, where each boundary hypersurface carries fibrations. Variants include conformally equivalent metrics such as $x^{-2}g$ (so-called fibred boundary metric; if $F$ is a point these are asymptotically conical metrics).

Such metrics occur on locally symmetric spaces and various moduli spaces, for example. The boundary $\partial M$, i.e. $x=0$, corresponds to 'infinity'. Another variant is  $x^2g$, which occurs, for example, as the induced metric on the complement of the union of two closed strictly convex sets with non-empty interior in a Riemannian manifold, which intersect (touch) in a single point. Here $F$ is a closed interval, hence has a boundary, and $x=0$ at the touching point, a cusp type singularity.

The goals of this project are to develop analytic tools, typically microlocal, for analyzing the natural geometric differential operators associated to such metrics and to apply these tools to problems in global analysis and spectral theory.

Two major results obtained during the first funding period are the detailed analysis of the low energy behavior of the resolvent for fibred boundary metrics (joint work with M. Talebi and B. Vertman) and the proof that the Calderón projector for spaces where the fibre $F$ has non-empty boundary is a phi-pseudodifferential operator (joint work with K. Fritzsch and E. Schrohe). Projects for the second funding period include: detailing the consequences of the latter result for the study of boundary value problems; developing this further to the study of spectral boundary problems for certain singular perturbations limiting to phi-metrics; studying phi-operators having non-constant rank normal operators; constructing a microlocalization of the space of left-invariant vector fields on the Lie group $SL(n,\mathbb{R})$.

A Calderón projector for an elliptic operator $P$ on a manifold with boundary $X$ is a projection from general boundary data to the set of boundary data of solutions $u$ of $Pu=0$. Seeley proved in 1966 that for compact $X$ and for $P$ uniformly elliptic up to the boundary there is a Calder\'on projector which is a pseudodifferential operator on $\partial X$. We generalize this result to the setting of fibred cusp operators, a class of elliptic operators on certain non-compact manifolds having a special fibred structure at infinity.

This applies, for example, to the Laplacian on certain locally symmetric spaces or on particular singular spaces, such as a domain with cusp singularity or the complement of two touching smooth strictly convex domains in Euclidean space. Our main technical tool is the $\phi$-pseudodifferential calculus introduced by Mazzeo and Melrose.

In our presentation we provide a setting that may  be useful for doing analogous constructions for other types of singularities.

This generalizes previous work by Guillarmou and Sher who considered asymptotically conic metrics, which correspond to the special case when the fibres are points. The new feature in the case of non-trivial fibres is that the resolvent has different asymptotic behavior on the subspace of forms that are fibrewise harmonic  and on its orthogonal complement. To deal with this, we introduce an appropriate 'split' pseudodifferential calculus, building on and extending work by Grieser and Hunsicker. Our work sets the basis for the discussion of spectral invariants on $\phi$-manifolds. 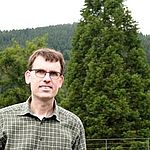