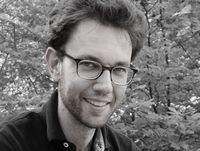 We show that the identity component of the group of diffeomorphisms of a closed oriented surface of positive genus admits many unbounded quasi-morphisms. As a corollary, we also deduce that this group is not uniformly perfect and its fragmentation norm is unbounded, answering a question of Burago--Ivanov--Polterovich. As a key tool we construct a hyperbolic graph on which these groups act, which is the analog of the curve graph for the mapping class group.

When the surface $S$ is a torus, we relate the dynamics of the action of a homeomorphism on $\mathcal{C}^\dagger(S)$ to the dynamics of its action on the torus via the classical theory of {\em rotation sets}.  We characterize homeomorphisms acting hyperbolically, show asymptotic translation length provides a lower bound for the area of the rotation set, and, while no characterisation purely in terms of rotation sets is possible, we give sufficient conditions for elements to be elliptic or parabolic.