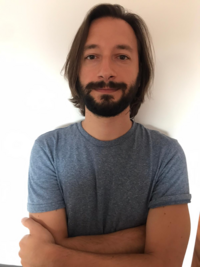 9Diffeomorphisms and the topology of positive scalar curvature

Let Γ be a finitely generated discrete group and let M˜ be a Galois Γ-covering of a smooth compact manifold M. Let u:X→BΓ be the associated classifying map. Finally, let SΓ∗(M˜) be the analytic structure group, a K-theory group appearing in the Higson-Roe exact sequence ⋯→SΓ∗(M˜)→K∗(M)→K∗(C∗Γ)→⋯. Under suitable assumptions on Γ we construct two pairings, first between SΓ∗(M˜) and the delocalized part of the cyclic cohomology of CΓ, and secondly between SΓ∗(M˜) and the relative cohomology H∗(M→BΓ). Both are compatible with known pairings associated with the other terms in the Higson-Roe sequence. In particular, we define higher rho numbers associated to the rho class ρ(D˜)∈SΓ∗(M˜) of an invertible Γ-equivariant Dirac type operator on M˜. Regarding the first pairing we establish in fact a more general result, valid without additional assumptions on Γ: indeed, we prove that it is possible to map the Higson-Roe analytic surgery sequence to the long exact sequence in noncommutative de Rham homology ⋯−→j∗H∗−1(AΓ)→ιHdel∗−1(AΓ)→δHe∗(AΓ)−→j∗⋯ with AΓ a dense homomorphically closed subalgebra of C∗rΓ and Hdel∗(AΓ) and He∗(AΓ) denoting versions of the delocalized homology and the homology localized at the identity element, respectively.

Related project(s):
9Diffeomorphisms and the topology of positive scalar curvature

Using standard results from higher (secondary) index theory, we prove that the positive scalar curvature bordism groups of a cartesian product GxZ are infinite in dimension 4n if n>0 G a group with non-trivial torsion. We construct representatives of each of these classes which are connected and with fundamental group GxZ. We get the same result in dimension 4n+2 (n>0) if G is finite and contains an element which is not conjugate to its inverse. This generalizes the main result of Kazaras, Ruberman, Saveliev, "On positive scalar curvature cobordism and the conformal Laplacian on end-periodic manifolds" to arbitrary even dimensions and arbitrary groups with torsion.

Related project(s):
9Diffeomorphisms and the topology of positive scalar curvature