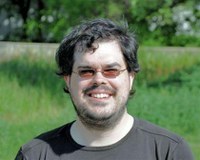 8Parabolics and invariants
61At infinity of symmetric spaces

We determine the fundamental groups of symmetrizable algebraically simply connected split real Kac-Moody groups endowed with the Kac-Peterson topology. In analogy to the finite-dimensional situation, the Iwasawa decomposition G=KAU provides a weak homotopy equivalence between K and G, implying π1(G)=π1(K). It thus suffices to determine π1(K) which we achieve by investigating the fundamental groups of generalized flag varieties. Our results apply in all cases in which the Bruhat decomposition of the generalized flag variety is a CW decomposition − in particular, we cover the complete symmetrizable situation; the result concerning the structure of π1(K) more generally also holds in the non-symmetrizable two-spherical situation.

A geodesic γ in an abstract reflection space X (in the sense of Loos, without any assumption of differential structure) is known to canonically admits an action of a 1-parameter subgroup of the group of transvections of X. In this article, we prove an analog of this result stating that, if X contains an embedded hyperbolic plane, then this yields a canonical action of a subgroup of the transvection group of X isomorphic to a perfect central extension of PSL(2,R). This result can be further extended to arbitrary Riemannian symmetric spaces of non-compact type embedded in X and can be used to prove that a Riemannian symmetric space and, more generally, the Kac-Moody symmetric space G/K for an algebraically simply connected two-spherical Kac-Moody group G satisfies a universal property similar to the universal property that the group G satisfies itself.

We investigate rigidity properties of S-arithmetic Kac-Moody groups in characteristic 0.